Hi, this is the blog for tour operator Ascot Golf. Here you’ll find details on our great new offers as well as comment on the golfing world. Enjoy.

The 2021 Golfing Season is upon us with international golfers at the ready to meet the challenges set by our new travel landscape.

The Canary Islands provide the perfect Winter-Sun escape with excellent offers in Tenerife at The Ritz Carlton Abama for 2021.  Unlimited Golf/Half Board packages return from May-September with best prices for booking before January 31.  Golfers booking stays from January-April 2021 receive a FREE Upgrade to the exclusive Deluxe Villa rooms with breakfast served at the ocean front El Mirador and cocktail hour at El Mirador Lounge before dinner each evening.   Given current travel demands the Workcation “Great Escape” Package for 30 nights full board also looks well priced and timely!

In Gran Canaria, Lopesan Villa del Conde offers excellent 5-star service with golf packages including play at Meloneras and Maspalomas.   Ascot Golf packages allow for Half Board meal plans with FREE Car Rental for booking until January 29 following the suspension of the Golf Shuttle service. Golfers may also note that the European Tour have scheduled the Gran Canaria Open from April 22-25, 2021 with course venue to be confirmed.

In the Algarve, Portugal Dom Pedro Vilamoura has extended low season rates for stays until February 28.   Dona Filipa has chipped in with a MEAL Deal for booking 2021 Season before January 31.  Dona Filipa packages include play at San Lorenzo, Pinheiros Altos and at Vale do Lobo.  Daily Golf is included with the room rate through the summer months as a complimentary value added.

Rocco Forte Verdura Sicily offers a Deluxe Golf upgrade to include FREE Buggy, Room Upgrade and Resort Credits for booking March-October 2021 before January 31. Historians can enjoy a visit to the fantastic Valley of the Temples at Agrigento, 45 minutes from Verdura. 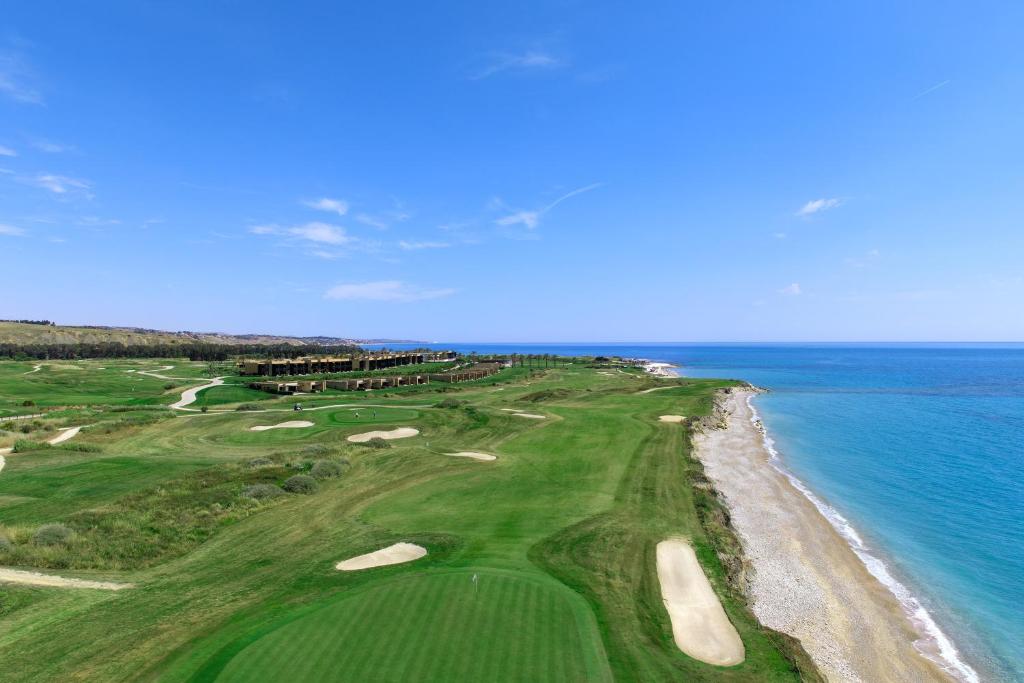 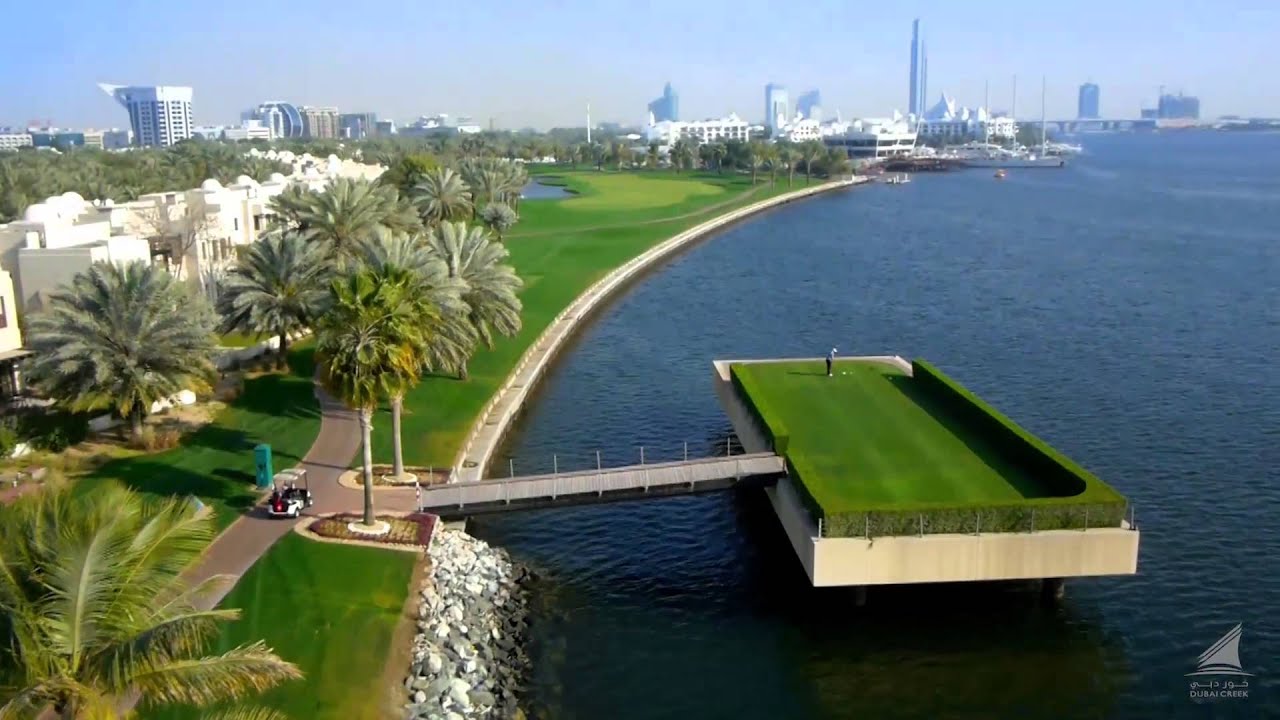 For further assistance with your golfing schedule in 2021, contact golf@ascotgolf.com.

Wishing you the very best in golf for New Year 2021.

The Team at Ascot Golf. 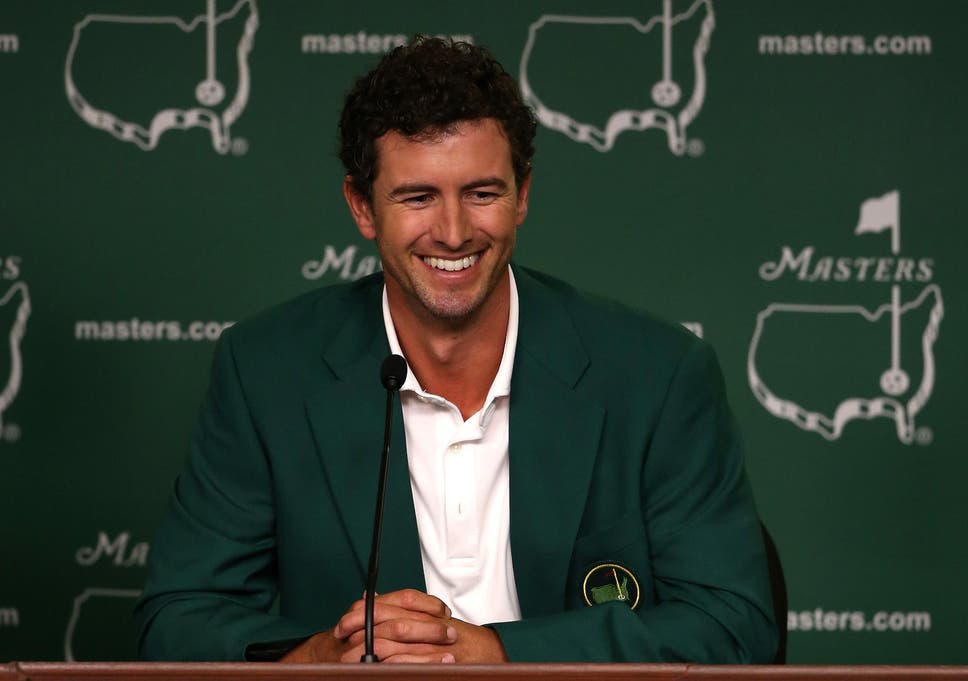 The current PGA Tour shutdown has afforded an opportunity to revisit a back catalogue of Major tournament coverage.

The Masters’ Sunday viewing is almost as captivating today as it was watching live coverage of Seve in 1983 through to Tiger’s comeback in 2019.  Leaderboards each year comprise of familiar faces and forces. Contenders presenting their own unique personality and approach.  The grandeur of Nicklaus & Palmer, the flair of Ballesteros & Mickelson, the bravado of Norman and the respectful manner of Crenshaw. As the Masters takes place each year at Augusta, we can follow a continuous story through the decades.

Golden Bear wins at Augusta in 1986

And what of golf fashions of The Masters Champions?  By the 80’s, golfing apparel had mostly moved beyond the tweed and plaid of Caddyshack.  PGA Tour players have paid increasing attention to their professional image and style.  Premium golf fashion brands such as Lacoste, Boss and Sergio Tacchini primarily tailored towards exclusive lifestyle.

The tournament fashions of Olazabal, Couples and Lyle also remainded natural and classic, blending players with Augusta’s azaleas and dogwoods, in harmony with the unique Masters’ atmosphere, aligned for precision performance.

The evolution of golf branding over the past two decades reflects the dominance of Tiger Woods following his first Masters victory in 1997.  While Tiger remains motivated by the history books of the game, his athleticism and exuberance has resulted in a “progressive” shift towards golf as an inclusive and diverse sport.  Golf is now branded by leading companies such as Nike and Addidas as an athletic pursuit, trending away from its previous country-club underpinning. 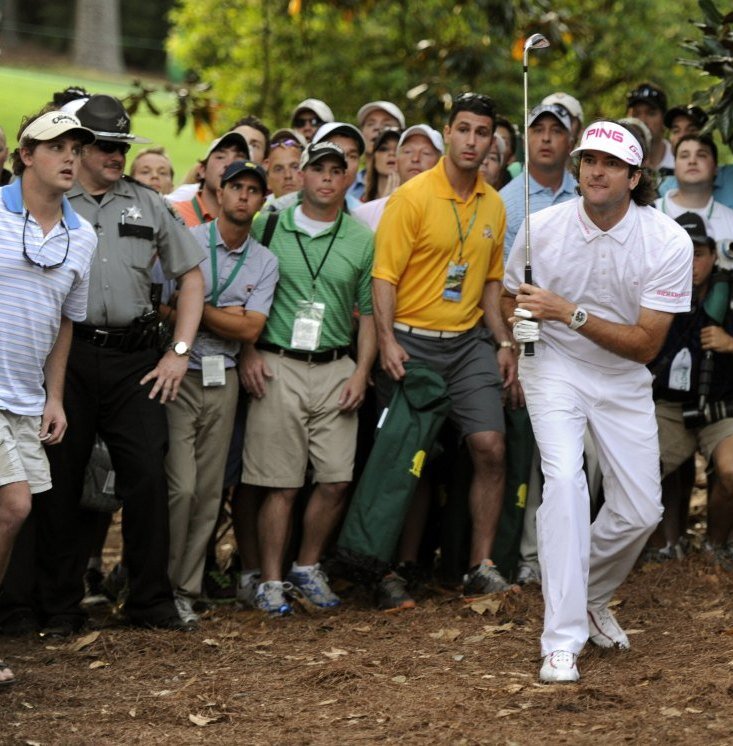 These more recent golf fashion trends are supported by advances in golf technology, reducing risk and increasing reward for the more athletic and stronger players.  Golf course designers have assisted by extending golf course layouts.  As a result, success in golf is now trending towards gym time and muscle mass, with talent and touch under threat.

Rory at at Par-5 2nd hole at Augusta

Today’s players are marketed as accessible Sports personalities rather than as aspirational lifestyle icons.  This modern approach risks undermining the players’ natural ability.   Public personas can be projected away from the required mindset for success at Augusta in particular. 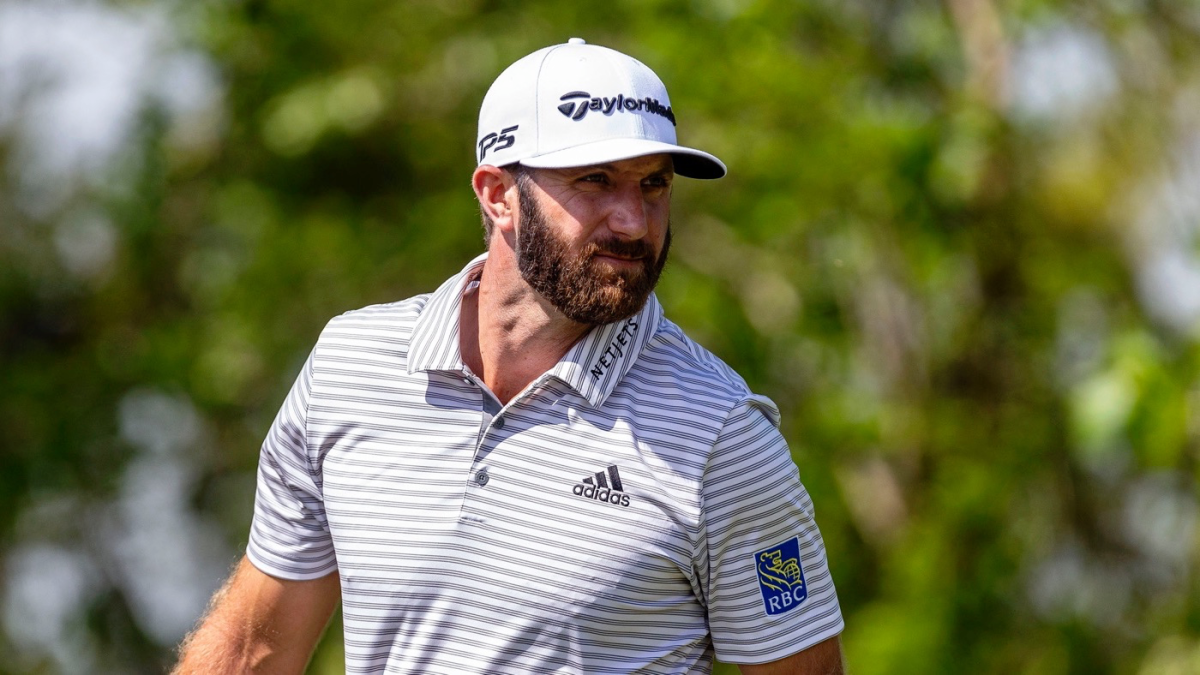 Leading players including Koepka, DJ, Rory, Thomas, Finau, Rahm and Matsuyama appear to be from a similar “stable” in terms of strategy and playing style.   It is notable however that Augusta so far has defended its Jackets from this power advance, while at the same time extending its length to a formidable 7600 yards. Recent Masters Champions have featured instead the more idiosyncratic Bubba Watson, Adam Scott, Willett, Sergio, Reed and of course Tiger. 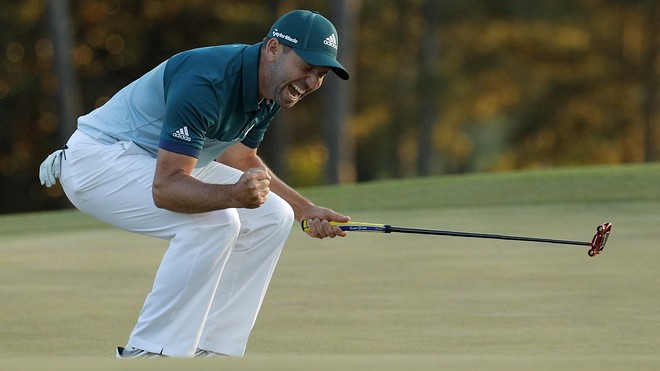 With the 2020 Masters postponed from April, the golfing world anticipates a possible October edition.  Given the far-reaching impact of current world events, leading golfing brands will no doubt be carefully managing their Autumn collections towards achieving Augusta green for their leading stars.

For further details on attending The Masters in 2020 or in 2021, please contact golf@Ascotgolf.com.

Woodland’s got it at Pebble!

Gary Woodland wins the 2019 US Open

Gary Woodland gained his maiden Major victory at the 2019 US Open at Pebble Beach.  The iconic Monterey golf course which played host to heroic wins by Nicklaus (1972), Watson (1982) and Woods (2000) has more recently crowned first time Major winners McDowell (2010) and Woodland this year (2019).

The stirring finish by Woodland on the 17th and 18th greens was well received by fans and commentators alike.  However, discerning golf viewers might be forgiven for concluding that this US Open did not quite live up to the billing! 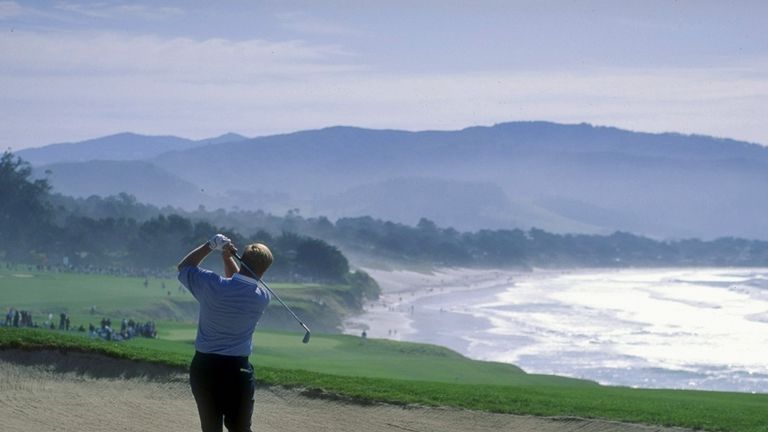 The Golden Bear at Pebble

As compelling as the landscape is at Pebble, and as vivid are the images of Nicklaus and Watson winning in previous Opens, Pebble Beach these days seems to underwhelm rather than inspire the world’s best players.  Just 3 players contended the lead over the final 36 holes.

This conservative course strategy is not only explained by the relatively short length of Pebble Beach within the modern game, but also by the staccato course layout, defending against top players’ usual rhythm and performance.

The challenge at Pebble’s US Open began for players at the one-sided Driving range, which faced into a left to right wind all week!  Brookes Koepka’s coach Claude Harmon conceded that his player decided against spending time on the range to protect against a developing slice!

Hole No.1 tested any such swing flaws with a left to right dog-leg, not long enough to justify more than an iron off the tee and not challenging enough to provide the players with satisfaction for scoring a par or better.  Anyone could make 4 here, immediately targeting the ego of world’s best players.

Onwards to Hole-2, a 520 yard Par-4 which tempted Rory to take driver in search of early gains on Sunday, resulting in double bogey to relegate him from Championship leaderboard.  Early frustration.

The 3rd offers little respite towards comfort, with a blind tee-shot over trees to a dog-leg left fairway.  A long iron or hybrid would leave a too long second shot, and driver brings bunkers and heavy rough into play.  “What’s the play Caddie?”, “Whatever you feel will work best” might be offered in reply.  The close bond between caddies and modern golfers stressed early on at Pebble.  Caddies returned to their bag carrying duties.

Three gnawing holes in and the 4th presents light relief with a birdie opportunity.  A short par-4, driveable, except with the Pacific on the right and cabbage left.  “What’s the play Caddie?”, “Whatever works for you boss”.  Not the golf course for “caddie-dependants”.  Decision time again early doors.

Most risk-reward holes on the PGA Tour are located on the back nine, when the players can assess how they are playing and where they stand on the leaderboard.   One “make or break” hole towards the end of the round within reach of the comforts and security of the clubhouse.  At Pebble there are 3 risk-reward holes within the first 6 holes, pressurising game plans from the get-go.

Onwards to No.5, a 180-yard par-3 towards the water that should be hit with a low power fade to evade the wind but land softly.   The rough bank on the left offers a bailout for the double cross and is preferred to the pot bunker short right.   Take a par or bogey, breathe in and out, and steer your player towards No. 6.

The 6th is a reachable Par-5 with a cliff face to the right.  The views are scenic like driving through alpine serpentines and mountain passes.  Spectacular, but also hair-raising for those behind the wheel.  It takes the remainder of the journey just to recover from subconscious thoughts of disasters avoided.  Woodland on Sunday went with iron, 3-wood and pitch.  2 putts later and another steady par in the bank offered good time to question if the strategy could have been more hawkish.  Really looking forward to attacking this course sometime soon.

What now Caddie? “A sandwedge 98-yards downhill to a rock hard 7th green.  Don’t go over, and don’t get too clever on the front either”.  Par or birdie, at least that kiddie hole is over.  Where do the ladies tee from?

The 8th also features a cliff, just 240 yards from the tee in the centre of the fairway, although with a possible 30-yard roll-out to the beach from 210.  “Give me a 5-iron… or better make it a 6-iron to be sure.  What do you think Caddie?”…”Yes, but don’t be too far back.. it’ll be 200 plus to the green and that’s not good here”.  Justin Rose roared “roll-out” after his 6-iron tee-shot stuck at the top of the fairway on Sunday before snatching at a 7-iron second to miss the green short right. Pebble slowly crushing.

The 9th is finally a chance to send it out there again.  Woodland accepted the challenge on Sunday but being mindful also of the ocean on the right, snap-hooked it left and got lucky to bogey-finish his first nine.  Could easily have been a double or more. The approach shot is usually on a downhill lie.  Brookes pushed right to bogey.  Not exactly “fun-land” until now, and more of the same to follow on the back nine stagger towards glory.

The Pebble layout is generally joyless for today’s players, other than being associated with a dreamlike nod to past winners.  McIIroy looked beaten approaching the first tee on Sunday as noted by Greg Allen, golf correspondent from Irish Radio/TV.  Patrick Reed snapped his chipper on Thursday.  The strategy employed by Woodland throughout the tournament could not have filled his heart with anything more than a quiet satisfaction for maintaining military discipline.

Pebble Beach is primarily a mental test for the world’s best players.  Can they maintain focus and will in the face of time honored demands and challenges?

And as SKY TV pundit Paul McGinley forecast at the beginning of the week, some players, McIlory included, struggle with this form of examination paper.   Justin Rose too could be questioned for the satisfaction that he was taking by leading on Thursday, and also from his fun back nine jostle with Woodland on Saturday, distracting possibly from the golf course conflict awaiting on Sunday. Rose admitted post tournament that his mindset went missing on Sunday afternoon.

As Woodland recounted in his press conference, it is paramount to control attitude, come what may. Don’t let your guard down until the tournament is done.  Woodland coach Pete Cowan offered to his player that “All men die but not all men live” before the final round.  Woodland also called on his experience this year in Scottsdale with downs syndrome golfer Amy Bockerstette who’s catchphase, “I’ve got this” stuck with Woodland throughout his week.

Gary and Amy at Scottsdale

The USGA should be commended for presenting a traditional golf course with fair but challenging conditions.  If the leading players can once again look forward to the unique challenges that such layouts bring, golf fans can also look foward to savouring more blanket finishes to inspire the world’s best to new heights.

Why not subscribe today for our Special offers newletters